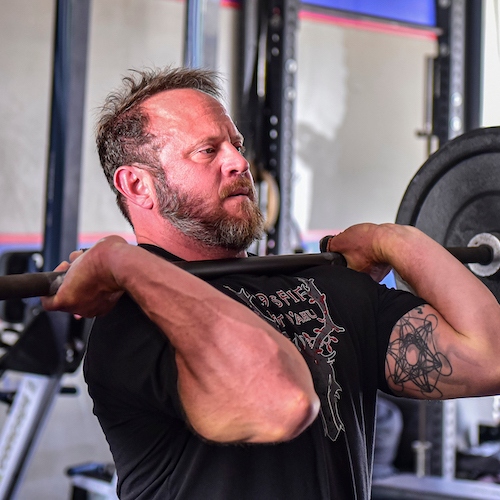 I started lifting at 13 in school under a coach that just knew, put weight on your back or in your hands. Not a great way to learn how to lift, but he told me the most important thing he ever could. "Lifting is a state of being, it's 90% mental and 10% physical. If the mind believes the body will follow and you can survive anything if you choose to." He drove that thought in on the football and track fields and I took that advice to all of the gyms and powerlifting competitions I was in. I lifted an all time best back squat at 527# and later hit a 631# deadlift. Eventually into weightlifting and become a USAW National Record holder in the snatch, clean and jerk, and Total. Finally changing sports to Crossfit and was 82 worldwide in my age group.

In 2007 I was in a motorcycle accident that did major damage to my right hip, shoulders and hands. My surgeon said that walking would be difficult and lifting was out of the question. But my coach from so long ago kept speaking to me, "90% mental and 10% physical." so I started lifting again getting back to 450# squats, until the cartilage failed and a second doctor told me, you'll never lift again like you were, 400# back squats won't happen again. My second hip surgery was in 2020. Eight weeks later I began to train and in 6 months I was back to a 405# back squat with no end in sight.

Lots of gyms and coaches say "anything is possible" without actually explaining WHY it is. I can and will when you step on the black mat with me.